After many months of planning, the eve of lifting off on yet another exciting overseas trip for the Band has almost arrived.

At 3:30pm on June 14th, the 51 member DVCB 2015 Tour Group will fly out of Hobart to Melbourne to connect with their Singapore Airlines flight that will take them to Barcelona.

On arrival in Spain the Group will travel by coach for about an hour to the delightful seaside resort of Malgrat de Mar, north of Barcelona. There will be several outdoor performances there during the next three days and the Group’s itinerary will also include a sightseeing trip to Barcelona.

The Tour Group will fly to Rome on the 18th June. In Rome the group will travel by coach to Terranuova in Tuscany which will be their base until the 24th June. While in Tuscany there will be performances given in Florence, Terranuova, Loro and Gropina. We thank Carol Samuelson – a long time member of the DVCB who now resides for part of the year in Tuscany – for arranging for the Band to meet and perform with some of the local bands in the region. The Tuscany leg of our journey is shaping up to be another one of the highlights on the trip.

After leaving Tuscany the Band will travel via Nuremberg for an overnight stopover before travelling on to Hildesheim. The Band will perform in an evening concert with the Senior Symphonic Wind Ensemble at the Hildesheim Music School. We are indebted to a long time friend and colleague of mine – Dieter Buschau, who is a senior staff member at the School, for facilitating this visit.

The next day the Band travels back to Rastede in Germany where the Band last visited and performed to great acclaim in 2008.

The Band will compete again in the European Band Championships there for the next three days. A special and privileged aspect of the Rastede visit will be the home stay accommodation which has generously been provided for the DVCB again.

On Monday the 29th June the Band will travel back to Copenhagen in Denmark where they will stay until 5th July.

While in Copenhagen the Band will compete in the World Association of Marching Showbands World Championship and will participate in the inaugural Copenhagen Performing Arts Festival.

It is significant that this is the ninth overseas tour made by the DVCB since 1994. It is now commonly known that this extraordinary statistic is unprecedented by any other amateur community ensemble throughout Australia. It is appropriate to acknowledge the enormous commitment and resolve by the many many people over the last twenty-one years who have sustained the Band’s vision and embraced the opportunities to travel and perform on the world stage. Therefore, the DVCB has become recognised as a Music Ambassador on behalf of the banding culture in Tasmania and Australia.

There are rumours that more exotic destinations are in the pipeline – so to speak – for future travels by the Band.

Let’s ensure that we encourage all our friends, relatives and supporters of the Band to attend the Gala Farewell Concert in the Stanley Burbury Theatre on Saturday June 6th at 7:30pm.

For previous articles please go to next page. 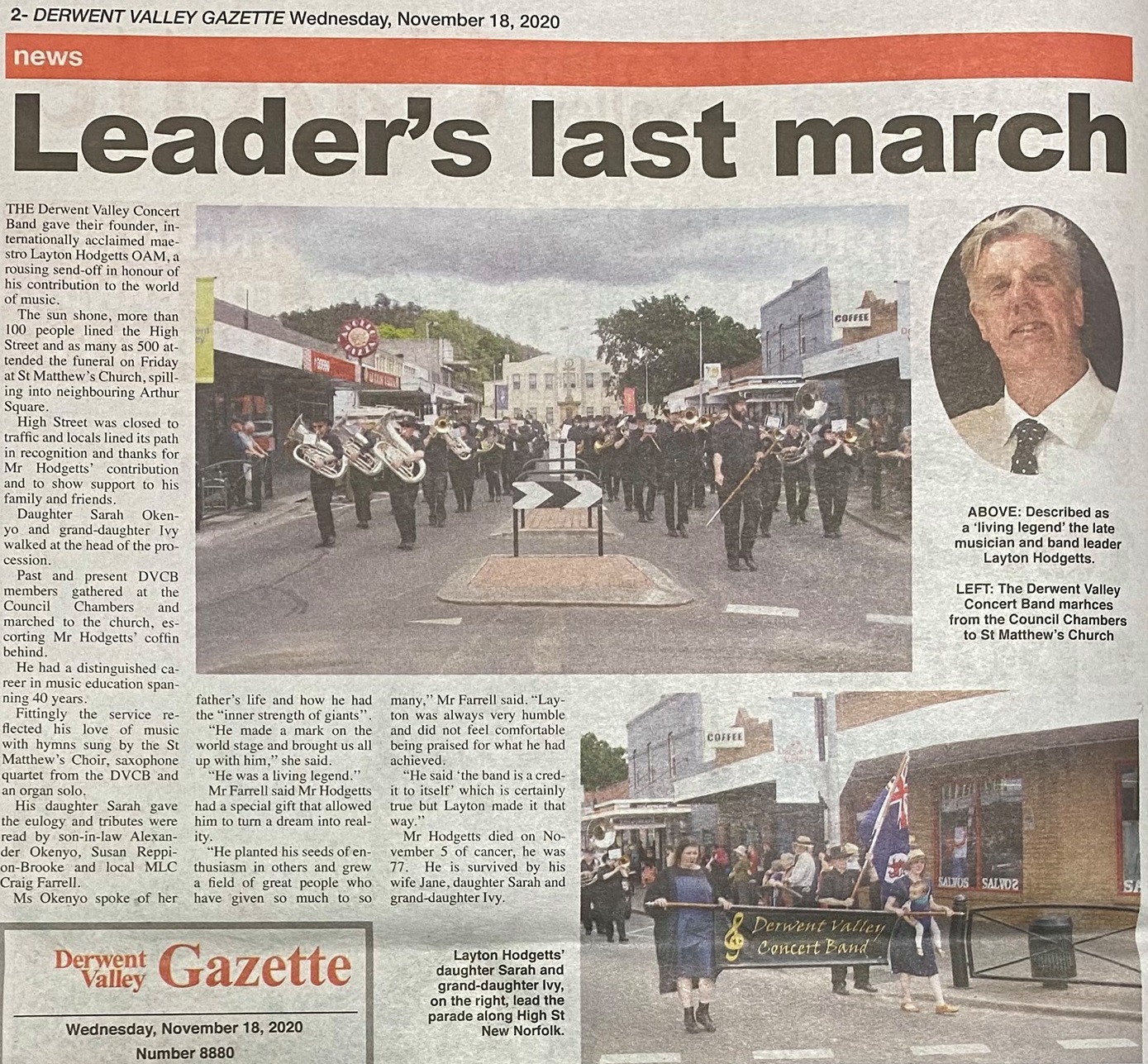